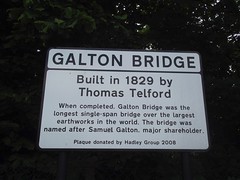 Galton Bridge Built in 1829 by Thomas Telford. When completed, Galton Bridge was the longest single-span bridge over the largest earthworks in the world. The bridge was named after Samuel Galton, major shareholder.