Sir William Crookes OM PRS (/krʊks/; 17 June 1832 – 4 April 1919) was a British chemist and physicist who attended the Royal College of Chemistry, now part of Imperial College London, and worked on spectroscopy. He was a pioneer of vacuum tubes, inventing the Crookes tube which was made in 1875. This was a foundational discovery that eventually changed the whole of chemistry and physics. He is credited with discovering the element thallium, announced in 1861, with the help of spectroscopy. He was also the first to describe the spectrum of terrestrial helium, in 1865. Crookes was the inventor of the Crookes radiometer but did not discern the true explanation of the phenomenon he detected. Crookes also invented a 100% ultraviolet blocking sunglass lens. For a time, he was interested in spiritualism and became president of the Society for Psychical Research. 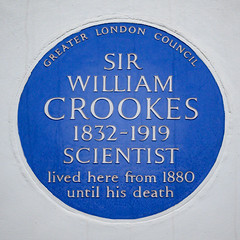