Constance Georgine Markievicz, known as Countess Markievicz (Polish: Markiewicz [marˈkʲɛvitʂ]; née Gore-Booth; 4 February 1868 – 15 July 1927), was an Irish politician, revolutionary, nationalist, suffragist, socialist, the first woman elected to the Westminster Parliament, and was elected Minister for Labour in the First Dáil, becoming the first female cabinet minister in Europe. She served as a Teachta Dála for the Dublin South constituency from 1921 to 1922 and 1923 to 1927. She was a Member of Parliament (MP) for Dublin St Patrick's from 1918 to 1922. A founder member of Fianna Éireann, Cumann na mBan and the Irish Citizen Army, she took part in the Easter Rising in 1916, when Irish republicans attempted to end British rule and establish an Irish Republic. She was sentenced to death but this was reduced on the grounds of her sex. On 28 December 1918, she was the first woman elected to the UK House of Commons, though, being in Holloway Prison at the time and in accordance with party policy, she did not take her seat. Instead, she and the other Sinn Féin MPs (as TDs) formed the first Dáil Éireann. She was also one of the first women in the world to hold a cabinet position, as Minister for Labour, from 1919 to 1922.

Constance Countess Markievicz lay in State in this Pillar Room of the Rotunda Hospital ...
Dublin, Ireland 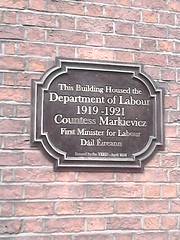 Constance Countess Markievicz lay in State in this Pillar Room of the Rotunda Hospital on 16 July 1927. Tens of thousands of people filed past the remains of one known as "The Lover of the Poor" She was interred in Glasnevin Cemetery.