Oxfam is an international confederation of charitable organizations focused on the alleviation of global poverty. Oxfam was originally founded at 17 Broad Street in Oxford, Oxfordshire, in 1942 as the Oxford Committee for Famine Relief by a group of Quakers, social activists, and Oxford academics; this is now Oxfam Great Britain, still based in Oxford. It was one of several local committees formed in support of the National Famine Relief Committee. Their mission was to persuade the British government to allow food relief through the Allied blockade for the starving citizens of occupied Greece. The first overseas Oxfam was founded in Canada in 1963. The organization changed its name to its telegraph address, OXFAM, in 1965. 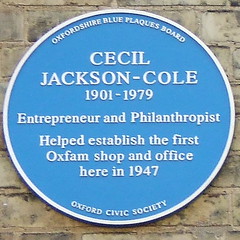