Thomas Clayton Wolfe (October 3, 1900–September 15, 1938) was an American novelist of the early 20th century. Wolfe wrote four lengthy novels as well as many short stories, dramatic works, and novellas. He is known for mixing highly original, poetic, rhapsodic, and impressionistic prose with autobiographical writing. His books, written and published from the 1920s to the 1940s, vividly reflect on American culture and the mores of that period, filtered through Wolfe's sensitive, sophisticated, and hyper-analytical perspective. After Wolfe's death, contemporary author William Faulkner said that Wolfe may have been the greatest talent of their generation for aiming higher than any other writer. Wolfe's influence extends to the writings of Beat Generation writer Jack Kerouac, and of authors Ray Bradbury and Philip Roth, among others. He remains an important writer in modern American literature, as one of the first masters of autobiographical fiction, and is considered North Carolina's most famous writer. 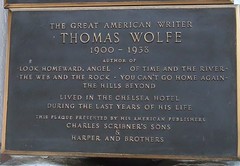 The great American writer Thomas Wolfe 1900 - 1936 author of Look Homeward, Angel, Of Time And The River, The Web And The Rock, You Can't Go Home Again, The Hills Beyond lived in the Chelsea Hotel during the last years of his life. This plaque presented by his American publishers Charles Scribner's Sons & Harper and Brothers

Thomas Wolfe House has been designated a Registered National Historic Landmark under the provisions of the Historic Sites Act of August 21, 1935 this site possesses exceptional value in commemorating or illustrating the history of the United States