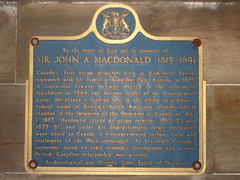 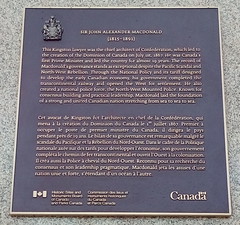 The Albany Club of Toronto The Albany Club of Toronto was established in 1882 as a conservative political club. Sir John A. Macdonald, Canada's first prime minister, strongly encouraged the creation of the club. He joined it in early 1883 and became its first honorary president in 1889. The first president was Alexander Morris, Q.C., Conservative house leader in Ontario and a former law student of Sir John A. Morris later became chief justice and Lieutenant Governor of Manitoba. The club was named after Prince Leopold, Duke of Albany, fourth son and eighth child of Queen Victoria. The club moved to 91 King Street East in August of 1898. Ten of Canada's Conservative prime ministers have been members of the Albany Club, as has every one of Ontario's ten Conservative premiers to date. Members have also held the offices of Governor General and Lieutenant Governor and have served their community, their city and their country with distinction. The club retains its conservative political affiliation. Erected to commemorate the centennial of the club's occupancy of this building.

To the glory of God and in memory of Sir John A. Macdonald 1815 - 1891 Canada's first prime minister, born in Ramshorn Parish, emigrated with his family to Kingston, Upper Canada, in 1820. A successful lawyer, he was elected to the provincial legislature in 1844 and became leader of the Conservative party. He played a leading role in the effort to achieve a federal union of Britain's North American colonies which resulted in the formation of the Dominion of Canada on July 1, 1867. Macdonald served as prime minister, 1867-73 and 1878-91, and under his administration large territories were added to Canada, a transcontinental railway built and settlement of the west encouraged.At his death Canada's autonomy, based on rapid economic development and a close British-Canadian relationship, was assured.

City Park, Kingston, ON, Canada where they was