Jacques Marie Émile Lacan (UK: /læˈkɒ̃/, US: /ləˈkɑːn/, French: [ʒak maʁi emil lakɑ̃]; 13 April 1901 – 9 September 1981) was a French psychoanalyst and psychiatrist who has been called "the most controversial psycho-analyst since Freud". Giving yearly seminars in Paris from 1953 to 1981, Lacan’s work has marked the French and international intellectual landscape, having made a significant impact on continental philosophy and cultural theory in areas such as post-structuralism, critical theory, feminist theory and film theory as well as on psychoanalysis itself. Lacan took up and discussed the whole range of Freudian concepts emphasising the philosophical dimension of Freud’s thought and applying concepts derived from structuralism in linguistics and anthropology to its development in his own work which he would further augment by employing formulae from predicate logic and topology. Taking this new direction, and introducing controversial innovations in clinical practice, led to expulsion for Lacan and his followers from the International Psychoanalytic Association. In consequence Lacan went on to establish new psychoanalytic institutions to promote and develop his work which he declared to be a “return to Freud” in opposition to prevalent trends in psychoanalysis collusive of adaptation to social norms. 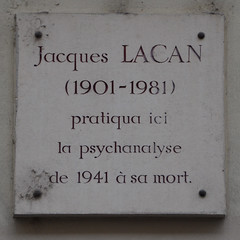