Denis Diderot (/ˈdiːdəroʊ/; French: [dəni did(ə)ʁo]; 5 October 1713 – 31 July 1784) was a French philosopher, art critic, and writer, best known for serving as co-founder, chief editor, and contributor to the Encyclopédie along with Jean le Rond d'Alembert. He was a prominent figure during the Age of Enlightenment. Diderot initially studied philosophy at a Jesuit college, then considered working in the church clergy before briefly studying law. When he decided to become a writer in 1734, his father disowned him. He lived a bohemian existence for the next decade. In the 1740s he wrote many of his best-known works in both fiction and non-fiction, including the 1748 novel The Indiscreet Jewels. In 1751, Diderot co-created the Encyclopédie with Jean le Rond d'Alembert. It was the first encyclopedia to include contributions from many named contributors and the first to describe the mechanical arts. Its secular tone, which included articles skeptical about Biblical miracles, angered both religious and government authorities; in 1758 it was banned by the Catholic Church and in 1759 the French government banned it as well, although this ban was not strictly enforced. Many of the initial contributors to the Encyclopédie left the project as a result of its controversies and some were even jailed. D'Alembert left in 1759, making Diderot the sole editor. Diderot also became the main contributor, writing around 7,000 articles. He continued working on the project until 1765. He was increasingly despondent about the Encyclopédie by the end of his involvement in it and felt that the entire project might have been a waste. Nevertheless, the Encyclopédie is considered one of the forerunners of the French Revolution. Diderot struggled financially throughout most of his career and received very little official recognition of his merit, including being passed over for membership in the Académie française. His fortunes improved significantly in 1766, when Empress Catherine the Great, who heard of his financial troubles, paid him 50,000 francs to serve as her librarian. He remained in this position for the rest of his life, and stayed a few months at her court in Saint Petersburg in 1773 and 1774. Diderot's literary reputation during his life rested primarily on his plays and his contributions to the Encyclopédie; many of his most important works, including Jacques the Fatalist, Rameau's Nephew, Paradox of the Actor, and D'Alembert's Dream, were published only after his death. 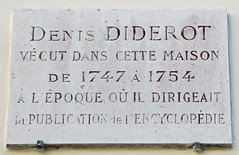 English translation: Denis Diderot lived in this house from 1747 to 1754 when he led the publication of the encyclopedia [AWS Translate]