Hadrian's Wall (Latin: Vallum Aelium), also known as the Roman Wall, Picts' Wall, or Vallum Hadriani in Latin, is a former defensive fortification of the Roman province of Britannia, begun in AD 122 in the reign of the emperor Hadrian. Running "from Wallsend on the River Tyne in the east to Bowness-on-Solway in the west", the Wall covered the whole width of the island. In addition to the wall's defensive military role, its gates may have been customs posts. A significant portion of the wall still stands and can be followed on foot along the adjoining Hadrian's Wall Path. The largest Roman archaeological feature in Britain, it runs a total of 73 miles (117.5 kilometres) in northern England. Regarded as a British cultural icon, Hadrian's Wall is one of Britain's major ancient tourist attractions. It was designated as a UNESCO World Heritage Site in 1987. In comparison, the Antonine Wall, thought by some to be based on Hadrian's wall, was not declared a World Heritage site until 2008. Hadrian's Wall marked the boundary between Roman Britannia and unconquered Caledonia to the north. The wall lies entirely within England and has never formed the Anglo-Scottish border. 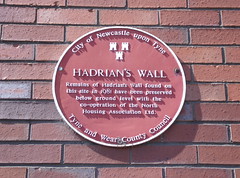 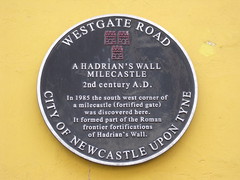 Hadrian's Wall. Within this plot, covered by red concrete stand the lower courses of the south face of Hadrian's wall built first in A.D. 122 from Newcastle Upon Tyne to Bowness on Solway, and afterwards extended to Wallsend, a distance in all of 80 Roman miles. The wall was here 10 feet wide, built with ashlar faces and rubble core and is considered to have been 15 feet high to the rampart walk.

21 Westgate Road, Newcastle upon Tyne, United Kingdom where it sited

Hadrian's Wall. Remains of Hadrian's Wall found on this site in 1981 have been preserved below ground level with the co-operation of the North Housing Association Ltd.

Crawhall Road, Newcastle upon Tyne, United Kingdom where it sited

A Hadrian's Wall Milecastle, 2nd century A.D. In 1985 the south west corner of a milecastle (fortified gate) was discovered here. It formed part of the Roman frontier fortifications of Hadrian's Wall. Westgate Road, City of Newcastle upon Tyne.

Westgate Road, Newcastle upon Tyne, United Kingdom where it sited