The Manchester Ship Canal is a 36-mile-long (58 km) inland waterway in the North West of England linking Manchester to the Irish Sea. Starting at the Mersey Estuary near Liverpool, it generally follows the original routes of the rivers Mersey and Irwell through the historic counties of Cheshire and Lancashire. Several sets of locks lift vessels about 60 feet (18 m) to the canal's terminus in Manchester. Landmarks along its route include the Barton Swing Aqueduct, the world's only swing aqueduct, and Trafford Park, the world's first planned industrial estate and still the largest in Europe. The rivers Mersey and Irwell were first made navigable in the early 18th century. Goods were also transported on the Runcorn extension of the Bridgewater Canal (from 1776) and the Liverpool and Manchester Railway (from 1830), but by the late 19th century the Mersey and Irwell Navigation had fallen into disrepair and was often unusable. In addition, Manchester's business community viewed the charges imposed by Liverpool's docks and the railway companies as excessive. A ship canal was therefore proposed to give ocean-going vessels direct access to Manchester. The region was suffering from the Long Depression; the canal's proponents argued that the scheme would boost competition and create jobs. They built public support for the scheme, which was first presented to Parliament as a bill in 1882. Faced with stiff opposition from Liverpool, the canal's supporters were unable to gain the necessary Act of Parliament to allow the scheme to go ahead until 1885. Construction began in 1887; it took six years and cost £15 million (equivalent to about £1.65 billion in 2011). When the ship canal opened in January 1894 it was the largest river navigation canal in the world, and enabled the new Port of Manchester to become Britain's third-busiest port despite being about 40 miles (64 km) inland. Changes to shipping methods and the growth of containerisation during the 1970s and '80s meant that many ships were now too big to use the canal and traffic declined, resulting in the closure of the terminal docks at Salford. Although able to accommodate vessels from coastal ships to intercontinental cargo liners, the canal is not large enough for most modern vessels. By 2011 traffic had decreased from its peak in 1958 of 18 million long tons (20 million short tons) of freight each year to about 7 million long tons (7.8 million short tons). The canal is now privately owned by Peel Holdings, whose plans include redevelopment, expansion, and an increase in shipping from 8,000 containers a year to 100,000 by 2030 as part of their Atlantic Gateway project. 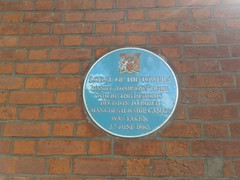 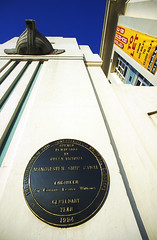 Lodge of 'The Towers' Daniel Adamson's home where the historic decision to build Manchester Ship Canal was taken 27 June 1882.

Trafford Road, Salford, United Kingdom where it was