Professor and author of the First Theory of Evolution

Jean-Baptiste Pierre Antoine de Monet, chevalier de Lamarck (1 August 1744 – 18 December 1829), often known simply as Lamarck (; French: [ʒɑ̃batist lamaʁk]), was a French naturalist. He was a soldier, biologist, and academic, and an early proponent of the idea that biological evolution occurred and proceeded in accordance with natural laws. Lamarck constructed one of the first theoretical frameworks of organic evolution. While this theory was generally rejected during his lifetime, Lamarck fought in the Pomeranian War (1757–62) against Prussia, and was awarded a commission for bravery on the battlefield. Posted to Monaco, Lamarck became interested in natural history and resolved to study medicine. He retired from the army after being injured in 1766, and returned to his medical studies. Lamarck developed a particular interest in botany, and later, after he published the three-volume work Flore françoise (1778), he gained membership of the French Academy of Sciences in 1779. Lamarck became involved in the Jardin des Plantes and was appointed to the Chair of Botany in 1788. When the French National Assembly founded the Muséum national d'Histoire naturelle in 1793, Lamarck became a professor of zoology. In 1801, he published Système des animaux sans vertèbres, a major work on the classification of invertebrates, a term he coined. In an 1802 publication, he became one of the first to use the term "biology" in its modern sense. Lamarck continued his work as a premier authority on invertebrate zoology. He is remembered, at least in malacology, as a taxonomist of considerable stature. The modern era generally remembers Lamarck for a theory of inheritance of acquired characteristics, called Lamarckism (inaccurately named after him), soft inheritance, or use/disuse theory, which he described in his 1809 Philosophie Zoologique. However, the idea of soft inheritance long antedates him, formed only a small element of his theory of evolution, and was in his time accepted by many natural historians. Lamarck's contribution to evolutionary theory consisted of the first truly cohesive theory of biological evolution, in which an alchemical complexifying force drove organisms up a ladder of complexity, and a second environmental force adapted them to local environments through use and disuse of characteristics, differentiating them from other organisms. Scientists have debated whether advances in the field of transgenerational epigenetics mean that Lamarck was to an extent correct, or not. 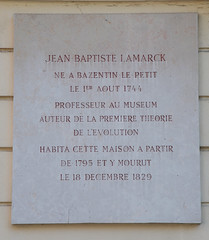 English translation: Jean Baptiste Lamarck did Bazentin-le-Petit on August 1, 1744 Professor at the museum Author of the first theory of evolution inhabited this house from 1795 and died there on December 18, 1829 [AWS Translate]