James Francis Edward Stuart (10 June 1688 – 1 January 1766), nicknamed the Old Pretender by Whigs, was the son of King James II and VII of England, Scotland and Ireland, and his second wife, Mary of Modena. He was Prince of Wales from July 1688 until, just months after his birth, his Catholic father was deposed and exiled in the Glorious Revolution of 1688. James II's Protestant elder daughter (the prince's half-sister), Mary II, and her husband (and the prince's cousin), William III, became co-monarchs and the Bill of Rights 1689 and Act of Settlement 1701 excluded Catholics from the English throne and, subsequently, the British throne. James Francis Edward was raised in Continental Europe and known as the Chevalier de St. George. After his father's death in 1701, he claimed the English, Scottish and Irish crowns as James III of England and Ireland and James VIII of Scotland, with the support of his Jacobite followers and his cousin Louis XIV of France. Fourteen years later, he unsuccessfully attempted to gain the British and Irish thrones during the Jacobite rising of 1715. A final attempt at rebellion, led by his elder son Charles Edward Stuart, was made in the Jacobite rising of 1745. Following James's death in 1766, Charles Edward Stuart continued to claim the British and Irish crowns as part of the Jacobite succession. 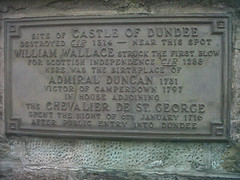 Site of Castle of Dundee destroyed cir 1314 - near this spot William Wallace struck the first blow for Scottish independence cir 1288. Here was the birthplace of Admiral Duncan 1731 victor of Camperdown 1797. In house adjoining the Chevalier De St. George spent the night of 6th January 1716 after public entry into Dundee

High Street, Dundee, United Kingdom where they spent the night of 6th January after public entry into Dundee (1716)