Arthur Vickers VC (2 February 1882 – 27 July 1944) was an English soldier and a recipient of the Victoria Cross, the highest and most prestigious award for gallantry in the face of the enemy that can be awarded to British and Commonwealth forces. He was also awarded the French Croix de Guerre. 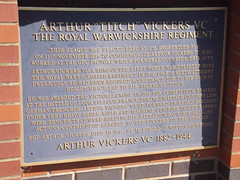 Arthur "Titch" Vickers VC The Royal Warwickshire Regiment This plaque was placed here by I M Properties PLC on 11th November 1998 to commemorate Arthur Vickers VC, who worked at the GEC Factory which formerly occupied this site. Arthur Vickers VC, a hero of the First World War, enlisted with the Royal Warwickshire Regiment in 1902, on his sixth attempt. Previously he had been refused acceptance due to his lack of height, which led to his nickname "Titch". He was awarded the Victoria Cross in 1915 for conspicuous bravery at the Battle of Loos, Hulloch, France, during an attack on the first line German trenches, Arthur Vickers went forward in broad daylight under very heavy shell, rifle and machine-gun fire to cut barbed wire fences that were holding his battalion back, his gallant actions contributed largely to the success of the assault. Sgt. Arthur Vickers died in 1944. He is buried in Witton Cemetery. Arthur Vickers VC 1882-1944