James Harold Wilson, Baron Wilson of Rievaulx, KG, OBE, PC, FRS, FSS (11 March 1916 – 24 May 1995) was a British politician who was Prime Minister of the United Kingdom twice, from October 1964 to June 1970, and again from March 1974 to April 1976. He was the Leader of the Labour Party from 1963 to 1976, and was a Member of Parliament (MP) from 1945 to 1983. Wilson is the only Labour leader to have formed Labour administrations following four general elections. Born in Huddersfield, West Riding of Yorkshire, to a politically active middle-class family, Wilson won a scholarship to attend Royds Hall Grammar School and went on to study modern history at Jesus College, Oxford. He was later an economic history lecturer at New College, Oxford, and a research fellow at University College, Oxford. Elected to Parliament in 1945 for the seat of Ormskirk, Wilson was immediately appointed to the Attlee government as a Parliamentary Secretary; he became Secretary for Overseas Trade in 1947, and was elevated to the Cabinet shortly thereafter as President of the Board of Trade. In 1950, he moved to represent the nearby seat of Huyton. Following Labour's defeat at the 1955 election, Wilson joined the Shadow Cabinet as Shadow Chancellor, and was moved to the role of Shadow Foreign Secretary in 1961. When Labour Leader Hugh Gaitskell died suddenly in January 1963, Wilson won the subsequent leadership election to replace him, becoming Leader of the Opposition. Wilson led Labour to a narrow victory at the 1964 election, and was appointed prime minister. His first period as prime minister saw a period of low unemployment and relative economic prosperity, although this would later become hindered by significant problems with Britain's external balance of payments. The Wilson government oversaw significant societal changes in the United Kingdom, abolishing both capital punishment and theatre censorship, decriminalising male homosexuality in England and Wales, relaxing the divorce laws and liberalising abortion law. In the midst of this programme Wilson called a snap election in 1966, which Labour won by a landslide. In 1969, he sent British troops to Northern Ireland. Despite leading in opinion polls, Labour unexpectedly lost the 1970 election to Edward Heath's Conservatives. Wilson chose to remain in the Labour leadership, and spent four years back in the role of Leader of the Opposition, before leading Labour through the February 1974 election, which resulted in a hung parliament. Although the Conservatives had won more votes than Labour, Heath's talks with the Liberal Party failed, and Wilson was able to broker an agreement with the Liberals to be appointed prime minister for a second time, now as leader of a minority government; Wilson called a snap election in October 1974, which gave Labour a small majority. During his second term as prime minister, Wilson oversaw the referendum that confirmed the UK's membership of the European Communities. In March 1976, he suddenly announced his resignation as prime minister, and was succeeded by James Callaghan. Wilson remained in the House of Commons until retiring in 1983, when he was elevated to the House of Lords as Lord Wilson of Rievaulx. Historians evaluate him in terms of leading the Labour Party through difficult political issues with considerable skill. Wilson's reputation was low when he left office and was still poor in 2016. Key issues he faced included the role of public ownership, membership of the European Communities, and how to avoid committing British troops to the Vietnam War. Wilson's approach to socialism was regarded by some as too moderate, by others too left-wing. A member of Labour's soft left, he joked about leading a Cabinet made up mostly of social democrats, comparing himself to a Bolshevik revolutionary presiding over a Tsarist cabinet, but there was little to divide him ideologically from the majority of his cabinet. His stated ambitions of substantially improving Britain's long-term economic performance, applying technology more democratically, and reducing inequality went to some extent unfulfilled. 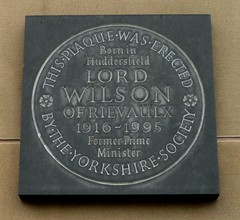 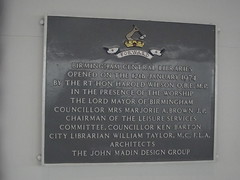 Huddersfield Library, Princess Alexandra Walk, Huddersfield, United Kingdom where they was born near (1916)

Cholmeley Lodge, Highgate, London, United Kingdom where they was