Arctic explorer, Fellow of the Royal Geographical Society, Knight Bachelor (from 1829), Knight Commander of the Royal Guelphic Order (from 1836), Lieutenant Governor of Tasmania (1837-1843), and Rear Admiral (from 1852)

Rear-Admiral Sir John Franklin KCH FRS FLS FRGS (16 April 1786 – 11 June 1847) was a British Royal Navy officer and Arctic explorer. After serving in wars against Napoleonic France and the United States, he led two expeditions into the Canadian Arctic and through the islands of the Arctic Archipelago, in 1819 and 1825, and served as Lieutenant-Governor of Van Diemen's Land from 1839 to 1843. During his third and final expedition, an attempt to traverse the Northwest Passage in 1845, Franklin's ships became icebound off King William Island in what is now Nunavut, where he died in June 1847. The icebound ships were abandoned ten months later and the entire crew died, from causes such as starvation, hypothermia, and scurvy. 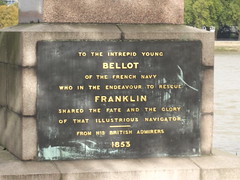 Obelisk monument to Bellot - Greenwich, London, United Kingdom where they is commemorated (1853)