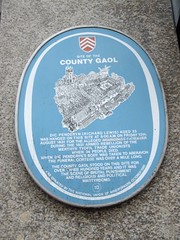 Site of the County Gaol Dic Penderyn (Richard Lewis) aged 23 was hanged on this site at 8.00 am on Friday 13th August 1831 for the alleged wounding of a soldier during the 1831 armed rebellion of the Merthyr trade unionists when 24 people died. When Dic Penderyn's body was taken to Aberavon the funeral cortege was over a mile long. The County Gaol stood on this site for over three hundred years and it was the scene of brutal punishment and religious and political martyrdoms. Was donated by the National Union of Mineworkers October 1980