Eugene Aram (1704 – 16 August 1759) was an English philologist, but also infamous as the murderer celebrated by Thomas Hood in his ballad, The Dream of Eugene Aram, and by Edward Bulwer-Lytton in his 1832 novel Eugene Aram. 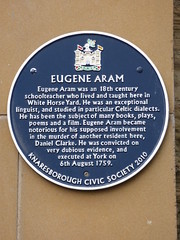 Eugene Aram was an 18th century schoolteacher who lived and taught here in White Horse Yard. He was an exceptional linguist, and studied in particular Celtic dialects. He has been the subject of many books, plays, poems and a film. Eugene Aram became notorious for his supposed involvement in the murder of another resident here, Daniel Clarke. He was convicted on very dubious evidence, and executed at York on 6th August 1759.

Park Square, Knaresborough, United Kingdom where they was