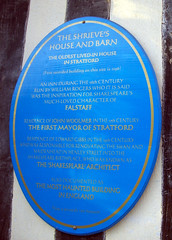 The Shrieve's House and Barn The oldest lived-in house in Stratford (First recorded building on this site is 1196) An inn during the 16th century run by William Rogers who it is said was the inspiration for Shakespeare's much-loved character of Falstaff. Residence of John Woolmer in the 17th century, the first mayor of Stratford. Residence of Edward Gibbs in the 19th century who was responsible for renovating the Swan and Maidenhead in Henley Street into the Shakespeare Birthplace, who was known as The 'Shakespeare' Architect. Also documented as The most haunted building in England Now a privately run museum.