Nash's House in Chapel Street, Stratford-upon-Avon, Warwickshire, England, is the house next door to the ruins and gardens of William Shakespeare's final residence, New Place. It is a grade I listed building and has been converted into a museum. The house was built around 1600 and belonged to Thomas Nash. The Shakespeare Birthplace Trust acquired New Place and Nash's House in 1876. The museum traces the history of Stratford-upon-Avon from the earliest settlers in the Avon Valley to Shakespeare's time. 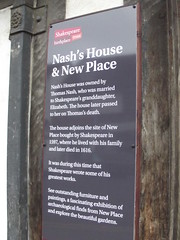