The Metropolitan Railway (also known as the Met) was a passenger and goods railway that served London from 1863 to 1933, its main line heading north-west from the capital's financial heart in the City to what were to become the Middlesex suburbs. Its first line connected the main-line railway termini at Paddington, Euston, and King's Cross to the City. The first section was built beneath the New Road using cut-and-cover between Paddington and King's Cross and in tunnel and cuttings beside Farringdon Road from King's Cross to near Smithfield, near the City. It opened to the public on 10 January 1863 with gas-lit wooden carriages hauled by steam locomotives, the world's first passenger-carrying designated underground railway. The line was soon extended from both ends, and northwards via a branch from Baker Street. Southern branches, directly served, reached Hammersmith in 1864, Richmond in 1877 and the original completed the Inner Circle in 1884. The most important route was northwest into the Middlesex countryside, stimulating the development of new suburbs. Harrow was reached in 1880, and from 1897, having achieved the early patronage of the Duke of Buckingham and the owners of Waddesdon Manor, services extended for many years to Verney Junction in Buckinghamshire. Electric traction was introduced in 1905 and by 1907 electric multiple units operated most of the services, though electrification of outlying sections did not occur until decades later. Unlike other railway companies in the London area, the Met developed land for housing, and after World War I promoted housing estates near the railway using the "Metro-land" brand. On 1 July 1933, the Met was amalgamated with the Underground Electric Railways Company of London and the capital's tramway and bus operators to form the London Passenger Transport Board. Former Met tracks and stations are used by the London Underground's Metropolitan, Circle, District, Hammersmith & City, Piccadilly, Jubilee and Victoria lines, and by Chiltern Railways and Great Northern. 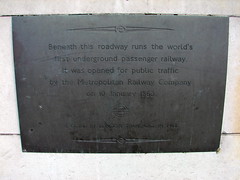 Beneath this roadway runs the world's first underground passenger railway. It was opened for public traffic by the Metropolitan Railway Company on 10 January 1863