Emily Wilding Davison (11 October 1872 – 8 June 1913) was an English suffragette who fought for votes for women in Britain in the early twentieth century. A member of the Women's Social and Political Union (WSPU) and a militant fighter for her cause, she was arrested on nine occasions, went on hunger strike seven times and was force-fed on forty-nine occasions. She died after being hit by King George V's horse Anmer at the 1913 Derby when she walked onto the track during the race. Davison grew up in a middle-class family, and studied at Royal Holloway College, London, and St Hugh's College, Oxford, before taking jobs as a teacher and governess. She joined the WSPU in November 1906 and became an officer of the organisation and a chief steward during marches. She soon became known in the organisation for her daring militant action; her tactics included breaking windows, throwing stones, setting fire to postboxes, planting bombs and, on three occasions, hiding overnight in the Palace of Westminster—including on the night of the 1911 census. Her funeral on 14 June 1913 was organised by the WSPU. A procession of 5,000 suffragettes and their supporters accompanied her coffin and 50,000 people lined the route through London; her coffin was then taken by train to the family plot in Morpeth, Northumberland. Davison was a staunch feminist and passionate Christian, and considered that socialism was a moral and political force for good. Much of her life has been interpreted through the manner of her death. She gave no prior explanation for what she planned to do at the Derby and the uncertainty of her motives and intentions has affected how she has been judged by history. Several theories have been put forward, including accident, suicide, or an attempt to pin a suffragette banner to the king's horse. 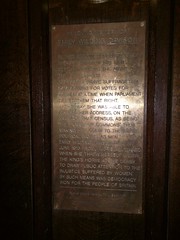 Emily Wilding Davison 11th October 1872 - 8th June 1913 It was from this place, on the 4th June 1913, that suffragette Emily Wilding Davison sustained injuries that resulted in her death at Epsom Cottage Hospital. Her lifelong dedication to women's suffrage, and the contribution that she made to the lives of British women, past and present, is remembered.

In loving memory of Emily Wilding Davison. In this broom cupboard Emily Wilding Davison hid herself illegally, during the night of the 1911 census. She was a brave suffragette campaigning for votes for women at a time when Parliament denied them that right. In this way she was able to record her address, on the night of that census, as being "The House of Commons", thus making her claim to the same political rights as men. Emily Wilding Davison died in June 1913 from injuries sustained when she threw herself under the King's horse at The Derby to draw public attention to the injustice suffered by women. By such means was democracy won for the people of Britain. Notice placed here by Tony Benn MP "I must tell you, Mr Speaker, that I am going to put a plaque in the House. I shall have it made myself and screwed on the door of the broom cupboard in the Crypt."

House of Parliament, London, United Kingdom where they hid (1911)

From this house Emily Wilding Davison suffragette set out for The Derby, Epsom-June 1913. Fight on, God will the victory. Votes for women.

Post Office, Longhorsley, United Kingdom where they set forth

Epsom Cottage Hospital, Epsom, United Kingdom where they was (1913)