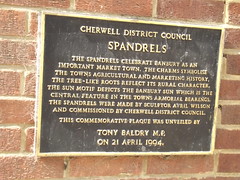 Spandrels The Spandrels celebrate Banbury as an important market town. The charms symbolise the towns agricultural and marketing history. The tree-like roots reflect its rural character. The sun motif depicts the Banbury sun which is the central feature in the towns armorial bearings. The Spandrels were made by sculptor Avril Wilson and commissioned by Cherwell District Council. This commemorative plaque was unveiled by Tony Baldry M.P. on 21 April 1994

Butchers Row (near Coach and Horses pub), Banbury, United Kingdom where it was (1994)