Woodes Rogers (c. 1679 – 15 July 1732) was an English sea captain, privateer and from 1718, the first Royal Governor of the Bahamas. He is known as the captain of the vessel that rescued marooned Alexander Selkirk, whose plight is generally believed to have inspired Daniel Defoe's Robinson Crusoe. Rogers came from an experienced seafaring family, grew up in Poole and Bristol, and served a marine apprenticeship to a Bristol sea captain. His father held shares in many ships, but he died when Rogers was in his mid-twenties, leaving Rogers in control of the family shipping business. In 1707, Rogers was approached by Captain William Dampier, who sought support for a privateering voyage against the Spanish, with whom the British were at war. Rogers led the expedition, which consisted of two well-armed ships, Duke and Duchess, and was the captain of Duke. In three years, Rogers and his men went around the world, capturing several ships in the Pacific Ocean. En route, the expedition rescued Selkirk, finding him on Juan Fernández Island on 1 February 1709. When the expedition returned to England in October 1711, Rogers had circumnavigated the globe, while retaining his original ships and most of his men, and the investors in the expedition doubled their money. The expedition made Rogers a national hero, but his brother was killed and Rogers was badly wounded in fights in the Pacific. On his return, he was successfully sued by his crew on the grounds that they had not received their fair share of the expedition profits, and Rogers was forced into bankruptcy. He wrote of his maritime experiences in the book A Cruising Voyage Round the World, which sold well, in part due to public fascination at Selkirk's rescue. Rogers was twice appointed Governor of the Bahamas, where he succeeded in warding off threats from the Spanish, and in ridding the colony of pirates. His first term as governor was financially ruinous, and on his return to England, he was imprisoned for debt. During his second term as governor, Rogers died in Nassau at the age of about 53. 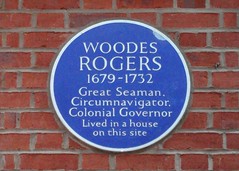