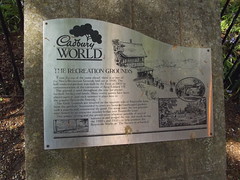 The Recreation Grounds From the top of the ramp ahead, there is a view of the Men's Recreation Grounds, laid out in 1896. The half-timbered pavilion was built by the Firm in 1902 in commemoration of the coronation of King Edward VII. The ground is used throughout the year for cricket, football, hockey and bowls. Many county games have been played upon it, and each summer it plays host to the popular Bournville Festival. The Girls Grounds are situated on the opposite side of Bournville Lane from the pavilion. Surrounded by trees are beautiful landscaped gardens with a pagoda and ornamental lily pond. For many years the two grounds were linked by an attractive wooden bridge over Bournville Lane. This unique setting and the preservation whenever possible of natural features in and around the site, did much during the 1920's and 1930's to help promote the Bournville Works as 'The Factory in a Garden'.