Frederick Douglass (born Frederick Augustus Washington Bailey, c. February 1817 or 1818 – February 20, 1895) was an African-American social reformer, abolitionist, orator, writer, and statesman. After escaping from slavery in Maryland, he became a national leader of the abolitionist movement in Massachusetts and New York, becoming famous for his oratory and incisive antislavery writings. Accordingly, he was described by abolitionists in his time as a living counterexample to slaveholders' arguments that slaves lacked the intellectual capacity to function as independent American citizens. Likewise, Northerners at the time found it hard to believe that such a great orator had once been a slave. Douglass wrote three autobiographies, describing his experiences as a slave in his Narrative of the Life of Frederick Douglass, an American Slave (1845), which became a bestseller and was influential in promoting the cause of abolition, as was his second book, My Bondage and My Freedom (1855). Following the Civil War, Douglass was active campaigner for the rights of freed slaves and wrote his last autobiography, Life and Times of Frederick Douglass. First published in 1881 and revised in 1892, three years before his death, the book covers events both during and after the Civil War. Douglass also actively supported women's suffrage, and held several public offices. Without his permission, Douglass became the first African American nominated for Vice President of the United States as the running mate and Vice Presidential nominee of Victoria Woodhull, on the Equal Rights Party ticket. Douglass believed in dialogue and in making alliances across racial and ideological divides, as well as in the liberal values of the U.S. Constitution. When radical abolitionists, under the motto "No Union with Slaveholders", criticized Douglass's willingness to engage in dialogue with slave owners, he replied: "I would unite with anybody to do right and with nobody to do wrong." 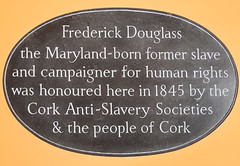 Hosanna Meeting House. Founded by free Blacks who had settled in this area, it was firs...
Lower Oxford Township, PA, United States

Underground Railroad. In the 1850s this area, known as Tanner's Alley, was important on...
Harrisburg, PA, United States 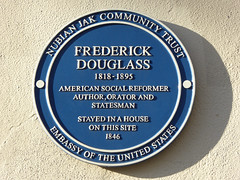 5 Summerhill Grove Frederick Douglass c. 1818-1895 I would unite with anybody to do ...
Newcastle upon Tyne, United Kingdom

Imperial Hotel, South Mall , Cork, Ireland where they was (1845)

City Hall, The Mall, Waterford, Ireland where they spoke (1845)

Hosanna Meeting House. Founded by free Blacks who had settled in this area, it was first known as the "African Meeting House." Formally organized in 1843 as an African Union Methodist Protestant church. A station stop on the Underground Railroad, its many visitors included Frederick Douglass and Sojourner Truth.

In Capitol Park, Walnut St. near Commonwealth Ave., Harrisburg, PA, United States where they spoke near

Frederick Douglass and John Brown. The two abolitionists met at a stone quarry here, Aug. 19-21, 1859, and discussed Brown's plans to raid the federal arsenal at Harpers Ferry. He urged Douglass to join an armed demonstration against slavery. Douglass refused, warning the raid would fail; the Oct. 16, 1859 attack confirmed his fears. Brown was captured with his surviving followers and was executed Dec. 2, 1859.

West Washington St., behind Southgate Mall, Chambersburg, PA, United States where they was (1859)

Frederick Douglass 1818-1895 American Social Reformer Author, Orator and Statesman stayed in a house on this site 1846

5 Summerhill Grove Frederick Douglass c. 1818-1895 I would unite with anybody to do right and with nobody to do wrong. African American abolitionist, author and social reformer. One of many fugitive slaves who stayed here with the Richardson family. Henry Richardson, his wife Anna and sister Ellen were Quakers and anti-slavery activists who helped raise funds for Douglass to formally buy his freedom in 1846.

5 Summerhill Grove, Newcastle upon Tyne, United Kingdom where they visited (1846)

Frederick Douglass 1818-1885. American author, orator, philosopher, freedom-fighter and statesman, lived here 1846. 'My part has been to tell the story of the slave.'