cosmonaut and 1st human to voyage into space

Yuri Alekseyevich Gagarin  (9 March 1934 – 27 March 1968) was a Soviet pilot and cosmonaut who became the first human to journey into outer space. Traveling in the Vostok 1 capsule, Gagarin completed one orbit of Earth on 12 April 1961. By achieving this major milestone in the Space Race he became an international celebrity, and was awarded many medals and titles, including Hero of the Soviet Union, his nation's highest honour. Gagarin was born in the Russian village of Klushino, and in his youth was a foundryman at a steel plant in Lyubertsy. He later joined the Soviet Air Forces as a pilot and was stationed at the Luostari Air Base, near the Norwegian border, before his selection for the Soviet space programme with five other cosmonauts. Following his spaceflight, Gagarin became deputy training director of the Cosmonaut Training Centre, which was later named after him. He was also elected as a deputy of the Soviet of the Union in 1962 and then to the Soviet of Nationalities, respectively the lower and upper chambers of the Supreme Soviet. Vostok 1 was Gagarin's only spaceflight, but he served as the backup crew to the Soyuz 1 mission, which ended in a fatal crash, killing his friend and fellow cosmonaut Vladimir Komarov. Fearful that a national hero might be killed, Soviet officials banned Gagarin from further spaceflights. After completing training at the Zhukovsky Air Force Engineering Academy in February 1968, he was allowed to fly regular aircraft. Gagarin died five weeks later when the MiG-15 training jet he was piloting with flight instructor Vladimir Seryogin crashed near the town of Kirzhach. 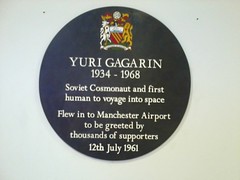 Manchester Airport : Terminal 3 - Arrivals, Manchester, United Kingdom where they was (1961)