abolitionist and campaigner for the abolition of slavery

Thomas Clarkson (28 March 1760 – 26 September 1846) was an English abolitionist, and a leading campaigner against the slave trade in the British Empire. He helped found The Society for Effecting the Abolition of the Slave Trade (also known as the Society for the Abolition of the Slave Trade) and helped achieve passage of the Slave Trade Act 1807, which ended British trade in slaves. He became a pacifist in 1816 and, together with his brother John, was among the twelve founders of the Society for the Promotion of Permanent and Universal Peace. In his later years, Clarkson campaigned for the abolition of slavery worldwide; it was then concentrated in the Americas. In 1840, he was the key speaker at the Anti-Slavery Society's (today known as Anti-Slavery International) first conference in London which campaigned to end slavery in other countries. 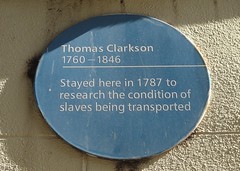 Thomas Clarkson (1760-1846) anti-slavery campaigner. This plaque commemorates the historic meeting in 1787 of Thomas Clarkson, Landlord Thompson and Bristol sailors at the Seven Stars public house. The testimony provided by Thompson and the sailors to Clarkson was used as evidence in parliament and helped the abolitionists to build a successful mass movement against slavery.

Thomas Clarkson 1760 -1846. Stayed here in 1787 to research the condition of slaves being transported.

Clarkson promoter of the emancipation bill 1833