Ulysses S. Grant (born Hiram Ulysses Grant; /ˈhaɪrəm juːˈlɪsiːz/ HY-rəm yoo-LIS-eez; April 27, 1822 – July 23, 1885) was an American military leader who served as the 18th president of the United States from 1869 to 1877. As president, Grant was an effective civil rights executive who created the Justice Department and worked with the Radical Republicans to protect African Americans during Reconstruction. As Commanding General, he led the Union Army to victory in the American Civil War in 1865 and thereafter briefly served as Secretary of War. Raised in Ohio, Grant possessed an exceptional ability with horses, which served him well through his military career. He was admitted to West Point, graduated 21st in the class of 1843 and served with distinction in the Mexican–American War. In 1848, he married Julia Dent, and together they had four children. Grant abruptly resigned his army commission in 1854 and returned to his family, but lived in poverty for seven years. He joined the Union Army after the Civil War broke out in 1861 and rose to prominence after winning several early Union victories on the Western Theater. In 1863 he led the Vicksburg campaign, which gained control of the Mississippi River. President Abraham Lincoln promoted him to lieutenant general after his victory at Chattanooga. For thirteen months, Grant fought Robert E. Lee during the high-casualty Overland Campaign and at Petersburg. On April 9, 1865, Lee surrendered to Grant at Appomattox. A week later, Lincoln was assassinated and was succeeded by President Andrew Johnson, who promoted Grant to General of the Army in 1866. Later Grant openly broke with Johnson over Reconstruction policies; Grant used the Reconstruction Acts, which had been passed over Johnson's veto, to enforce civil rights for recently freed African Americans. A war hero, drawn in by his sense of duty, Grant was unanimously nominated by the Republican Party and was elected president in 1868. As president, Grant stabilized the post-war national economy, supported ratification of the 15th Amendment, and crushed the Ku Klux Klan. He appointed African Americans and Jewish Americans to prominent federal offices. In 1871, Grant created the first Civil Service Commission, advancing civil service more than any prior president. The Liberal Republicans and Democrats united behind Grant's opponent in the presidential election of 1872, but Grant was handily re-elected. Grant's Native American policy was to assimilate Indians into the White culture; the Great Sioux War was fought during his term. In Grant's foreign policy, the Alabama claims against Great Britain were peacefully resolved, but his prized Caribbean Dominican Republic annexation was rejected by the Senate. Scandals were prevalent in Grant's federal offices. Grant's responses to corruption charges were mixed, often naïvely defending the culprits, particularly his war-time comrade Orville E. Babcock. But Grant also appointed reformers, such as John Brooks Henderson, for the prosecution of the Whiskey Ring. The Panic of 1873 plunged the nation into a severe economic depression that allowed the Democrats to win the House majority. In the intensely disputed presidential election of 1876, Grant facilitated the approval by Congress of a peaceful compromise. In his retirement, Grant was the first president to circumnavigate the world on his tour, dining with Queen Victoria and meeting many prominent foreign leaders. In 1880, Grant was unsuccessful in obtaining the Republican presidential nomination for a third term. In the final year of his life, facing severe financial reversals and dying of throat cancer, he wrote his memoirs, which proved to be a major critical and financial success. At the time of his death, he was memorialized as a symbol of national unity. Grant was a modern general and "a skillful leader who had a natural grasp of tactics and strategy". Historical assessments of his presidency have improved over time; he was ranked 38th in 1994 and 1996 but ranked 21st in 2018 and 24th in 2021. Although critical of scandals and Grant's loyal defense of culprits, modern historians have emphasized his two-term presidential accomplishments. These included his protection of African American civil rights, prosecution of the Klan, innovative Native American policy, and the settlement of the Alabama claims. 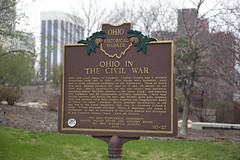 Historical Building. Built in 1912-13 to serve as a library and gymnasium, this is the ...
Texas Historical Marker #02496
Denton, TX, United States

Ohio in the Civil War With five army camps in Columbus, Capitol Square was a military crossroads from 1861 to 1865. Ohio troops were mustered, paid, and on some occasions garrisoned at the Statehouse. Three of every five male Ohioans between the ages of 18 and 45 served in the Civil War. Ohio's contribution to the war effort was enormous, supplying almost 320,000 soldiers to the Union Army, representing 230 regiments and 26 independent artillery batteries. More than 35,000 soldiers died during the war, and 30,000 more were disabled. One hundred forty-eight Ohio soldiers received the Congressional Medal of Honor for valor. Perhaps Ohio's greatest contribution to the war was to the Union leadership that won it: Generals Ulysses S. Grant, William Tecumseh Sherman, Philip H. Sheridan, and James B. McPherson, as well as Secretary of War Edwin Stanton and Secretary of the Treasury Salmon Chase, were all Ohioans.

E State St, Columbus, OH, United States where they was

Historical Building. Built in 1912-13 to serve as a library and gymnasium, this is the oldest remaining building on the North Texas campus. It became known as the Historical Building in 1925, when history professor Joseph Lyman Kingsbury (1880-1949) began a museum that was housed here until 1986. The institution's eclectic collection included published works and artifacts from around the world. Upon the museum's closing the collection was distributed to other institutions in Denton. The building also has housed academic offices, classrooms, and the College Radio Station. (1994) #2496

?, Denton, TX, United States where they was

?, Pottsboro, TX, United States where they was