David Vaughan Thomas or David Vaughan-Thomas (15 March 1873, Ystalyfera, Glamorgan – 15 September 1934, Johannesburg, South Africa), born David Thomas, and known also by his bardic name Pencerdd Vaughan, was a composer, organist, pianist and music administrator. His compositions are deeply influenced by the musical and literary traditions of his native Wales. Though his music is now little performed he has been described as "the leading native Welsh musician of [his] time" and as "one of the most important composers in the transitional period of Welsh music from the Victorian era to our own times". The broadcaster Wynford Vaughan-Thomas was his son. 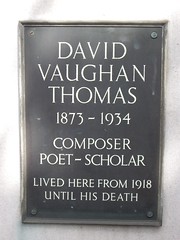