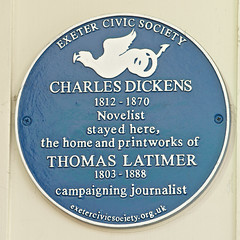 143 Fore Street, Exeter, United Kingdom where they lived and had a printing works

143 Fore Street 18th Century Merchants House Built in 1714 by Sir Thomas Bury, merchant: sold to Sir John Duntze (also a merchant) in 1733 and lived in by his family until 1788. In the 19th century it became the offices of the 'Western Times' which was printed in the adjacent buildings. Charles Dickens, who was a personal friend of Thomas Latimer, the paper's proprietor and editor, stayed here in 1839.