postal reformer, originator of the Penny Post, and Knight Commander of the Order of the Bath (from 1860)

Sir Rowland Hill, KCB, FRS (3 December 1795 – 27 August 1879) was an English teacher, inventor and social reformer. He campaigned for a comprehensive reform of the postal system, based on the concept of Uniform Penny Post and his solution of pre-payment, facilitating the safe, speedy and cheap transfer of letters. Hill later served as a government postal official, and he is usually credited with originating the basic concepts of the modern postal service, including the invention of the postage stamp. Hill made the case that if letters were cheaper to send, people, including the poorer classes, would send more of them, thus eventually profits would go up. Proposing an adhesive stamp to indicate pre-payment of postage – with the first being the Penny Black – in 1840, the first year of Penny Post, the number of letters sent in the UK more than doubled. Within 10 years, it had doubled again. Within three years postage stamps were introduced in Switzerland and Brazil, a little later in the US, and by 1860, they were used in 90 countries. 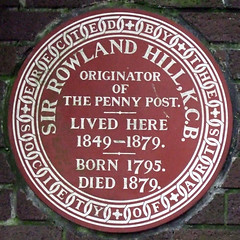 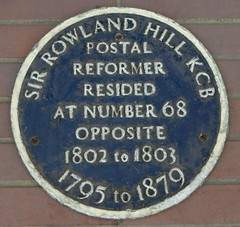 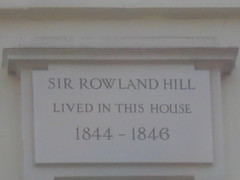 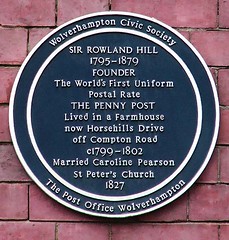 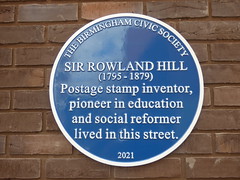 146 Hagley Road, Birmingham, United Kingdom where they was

The Mailbox, Severn Street, Birmingham, United Kingdom where they was

Cartwright Gardens, WC1, London, United Kingdom where they was

Blackwell Street, Kidderminster, United Kingdom where they was born (1795)

The Hollies, 11 Albion Hill, Loughton, United Kingdom where they was