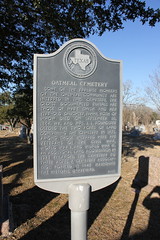 Oatmeal Cemetery. Some of the earliest pioneers of the Oatmeal community are interred in this cemetery. The oldest documented burials are those of Mary Smith and her year-old daughter, Fanny, both of whom died on September 16, 1854. Mr. and Mrs. J. L. Roundtree deeded the two acres of land containing the cemetery in 1871. Among those interred here are veterans of the Civil War, World War I, and World War II. An additional land acquisition in 1983 enlarged the cemetery to three acres. A cemetery association formed in 1945 maintains the historic graveyard. #9737