Aston University is a public research university situated in the city centre of Birmingham, England. Aston began as the Birmingham Municipal Technical School in 1895, evolving into the UK's first College of Advanced Technology in 1956. Aston University received its royal charter from Queen Elizabeth II on 22 April 1966. Aston pioneered the integrated placement year concept over 50 years ago, and more than 73% of Aston students take a placement year, the highest percentage in the UK. In 2020, Aston University was named "University of the Year" by The Guardian and the newspaper also awarded Aston Students' Union its "Buildings That Inspire" award. The Times Higher Education Awards named Aston University as its "Outstanding Entrepreneurial University" in 2020. In 2021, the university announced plans to close its Department of History, Languages and Translation, focusing instead on health, engineering, and business. This decision led to protests from members of the university, as well as humanities scholars broadly. 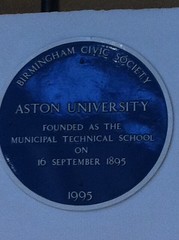