The Old Rep is a theatre located in Station Street in Birmingham, England, managed by Birmingham Ormiston Academy, with the theatre's technical department wholly run by Birmingham Ormiston Academy also. The Old Rep theatre was built as a permanent home for Barry Jackson's increasingly well established amateur theatre group, The Pilgrim Players, later known as The Birmingham Repertory Company. Barry Jackson funded the construction of the theatre, and established his, by now, professional company there. It was the original home of the Birmingham Repertory Theatre and was the first purpose-built repertory theatre in the UK. It was the creation of Barry Jackson in collaboration with the architect S. N. Cooke, a colleague from the Birmingham School of Art. Both Jackson and Cooke took inspiration from the democratic nature of theatres they had visited in Germany. The design of The Old Rep was particularly influenced by Max Littmann's 1908 Künstlertheater in Munich. Building on a small footprint between Station Street and Hinckley Street meant that the auditorium had to be steeply raked. This feature added to the experience of audience members as no view of the stage was obstructed. Construction began in October 1912. Built day and night for four months, it was opened on 15 February 1913 with a performance of Twelfth Night, preceded by a reading by its founder, Barry Jackson, of the poem The Mighty Line written by John Drinkwater. When completed it had a seating capacity of 464. Many of the current features are original from the theatre's first opening. It was one of the UK's premier theatre venues and many great stars have walked the boards. There is still an original mirror from the opening of the Old REP just before you walk on stage. Now seating 383, the theatre stages shows from many small scale touring companies and several local amateur drama companies. In 2014 Birmingham Ormiston Academy took over the management of the theatre after a cut in funding from Birmingham City Council. The Old Rep continues to operate as before, but is also used by the school for teaching performance and back-stage skills. The theatre is situated just opposite New Street Station, from which a blue plaque, above the theatre's first floor windows, to Barry Jackson may be seen. Two doors to the west of the theatre is Britain's oldest working cinema, the Electric Cinema. 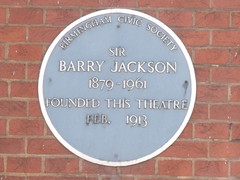