William Richard Morris, 1st Viscount Nuffield, GBE, CH, FRS (10 October 1877 – 22 August 1963) was an English motor manufacturer and philanthropist. He was the founder of Morris Motors Limited and is remembered as the founder of the Nuffield Foundation, the Nuffield Trust and Nuffield College, Oxford, as well as being involved in his role as President of BUPA in creating what is now Nuffield Health. He took his title from the village of Nuffield in Oxfordshire, where he lived. 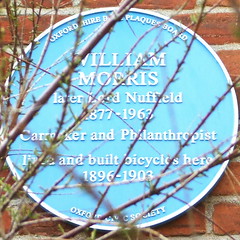