(For other people named William Turner, see William Turner (disambiguation).) William Turner (29 November 1789 – 7 August 1862) was an English painter who specialised in watercolour landscapes. He was a contemporary of the more famous artist J. M. W. Turner and his style was not dissimilar. He is often known as William Turner of Oxford or just Turner of Oxford to distinguish him from his better known namesake. Many of Turner's paintings depicted the countryside around Oxford. One of his best known pictures is a view of the city of Oxford from Hinksey Hill. In 1898 the Ashmolean Museum in Oxford held a retrospective exhibition of his work. Some of his paintings are still on permanent display at the museum. In 1984 the Oxfordshire County Council presented his work in an exhibition at the Oxfordshire County Museum in Woodstock. His paintings are also held in national and international collections, for example at the Tate Gallery (London, UK), the Metropolitan Museum of Art (New York City, US) and the Dunedin Public Art Gallery (New Zealand). 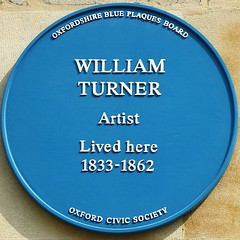