George Dawson (24 February 1821 – 30 November 1876) was an English nonconformist preacher, lecturer and activist. He was an influential voice in the calls for radical political and social reform in Birmingham, a philosophy that became known as the Civic Gospel. 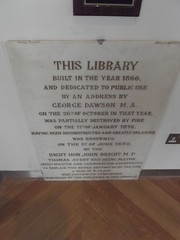 This Library built in the year 1866, and dedicated to public use by an address by George Dawson M.A. on the 26th of October of that year, was partially destroyed by fire on the 11th of January 1879, having been reconstructed and greatly enlarged, was reopened on the 1st of June 1882, by the Right Hon John Bright M.P. Thomas Avery Esqs being Mayor. Messrs Martin and Chamberlain Architects to replace the books destroyed by the fire a sum of £14,000 was forthwith subscribed principally by the burgesses of this borough