John Benjamin Dancer (8 October 1812 – 24 November 1887) was a British scientific instrument maker and inventor of microphotography. He also pioneered stereography. By 1835, he controlled his father's instrument making business. He was responsible for various inventions, but did not patent many of his ideas. In 1856, he invented the stereoscopic camera (GB patent 2064/1856). He died at the age of 75 and was buried at Brooklands Cemetery, Sale, Greater Manchester. Dancer improved the Daniell cell by introducing the porous pot cell, which he invented in 1838. He was a leading inventor and practitioner in the emerging field of microphotography, work he began shortly after the Daguerreotype process was first announced in 1839. His novel uses of microphotography, such as "the reduction of the 680 word tablet erected in memory of the electrician William Sturgeon to a positive one-sixteenth of an inch in diameter", attracted much public attention. Dancer was remembered as a person very willing to share his expertise with others. For example, he assisted the physicist James Prescott Joule with the development of scientific instruments such as an apparatus for measuring the internal capacity of the bore of thermometer tubes, a tangent galvanometer, and other devices useful in Joule's research. In 1842 Dancer took a daguerreotype from the top of the Royal Exchange which is the earliest known photograph showing part of Manchester. 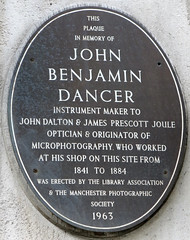 This plaque in memory of John Benjamin Dancer instrument maker to John Dalton & James Prescott Joule optician & originator of microphotography, who worked at his shop on this site from 1841 to 1884