David Noel Redding (25 December 1945 – 11 May 2003) was an English rock musician, best known as the bass player for the Jimi Hendrix Experience and guitarist/singer for Fat Mattress. Following his departure from the Experience in 1969 and the dissolution of Fat Mattress in 1970, Redding formed the short-lived group Road in the United States, which released the self-titled album Road before he re-located to Clonakilty, Ireland, in 1972. There he formed the Noel Redding Band with former Thin Lizzy guitarist Eric Bell, with whom he released two albums. Although by the 1980s Redding had largely removed himself from the music business, he would later perform around his new hometown with wife Carol Appleby. He was inducted into the Rock and Roll Hall of Fame in 1992 as a member of the Jimi Hendrix Experience. 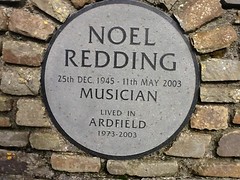