Giuseppe Mazzini (UK: /mætˈsiːni/, US: /mɑːtˈ-, mɑːdˈziːni/, Italian: [dʒuˈzɛppe matˈtsiːni]; 22 June 1805 – 10 March 1872) was an Italian politician, journalist, and activist for the unification of Italy and spearhead of the Italian revolutionary movement. His efforts helped bring about the independent and unified Italy in place of the several separate states, many dominated by foreign powers, that existed until the 19th century. An Italian nationalist in the historical radical tradition and a proponent of social-democratic republicanism, Mazzini helped define the modern European movement for popular democracy in a republican state. Mazzini's thoughts had a very considerable influence on the Italian and European republican movements, in the Constitution of Italy, about Europeanism and more nuanced on many politicians of a later period, among them American president Woodrow Wilson and British prime minister David Lloyd George as well as post-colonial leaders such as Mahatma Gandhi, Veer Savarkar, Golda Meir, David Ben-Gurion, Kwame Nkrumah, Jawaharlal Nehru and Sun Yat-sen. 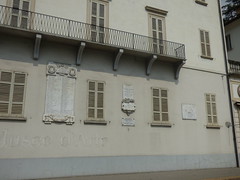 Dio Popolo Pensiero 1805-1872 in this country. Giuseppe Mazzini the apostle of modern democracy inspired young Italy with the ideal of independence unity and regeneration of his country.

10 Laystall Street, London, United Kingdom where they was

In this house Giuseppe Mazzini, the apostle of modern democracy, inspired young Italy with the ideal of the unity, independence & regeneration of his country