The Merseyside Maritime Museum is a museum based in the city of Liverpool, Merseyside, England, UK. It is part of National Museums Liverpool and an Anchor Point of ERIH, The European Route of Industrial Heritage. It opened for a trial season in 1980 before fully opening in 1984 and expanding in 1986. The museum occupies warehouse block D at the Albert Dock, along with the Piermaster's House, Canning Half Tide Dock and Canning Graving Docks. The city's seafaring heritage is brought to life within the historic Albert Dock. The museum's collections reflect the international importance of Liverpool as a gateway to the world, including its role in the transatlantic slave trade and emigration, the merchant navy and the RMS Titanic. The UK Border Agency National Museum, 'Seized! The Border and Customs uncovered' is located in the basement gallery of the building. 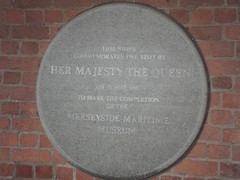