The Victoria Pier was a pier in the seaside resort of Colwyn Bay, Wales. Despite dismantlement since May 2018, much of the metalwork remains and retains the legal status of a grade-II listed structure. Plans for a partial re-build in 2019 have been made by the pier's owner, Conwy County Borough Council. Designed by Maynall and Littlewoods the pier opened in 1900 and was extended in 1903 to the length of 227m. The first two pavilions built on the pier burnt down along with a bijou theatre. The third pavilion was built in 1934 and significantly extended and altered in the 1970s to allow for nightclub and amusement arcade entertainments. From the late 1980s the pier began to decline with the seaward portion of the pier being closed due to its poor state of repair. The condition of the pier and the entertainments continued to decline until 2008 when it closed permanently. A long-standing legal wrangle between the previous private owner and the council ensued. By 2013 the pier was in danger of collapse and a local community group attempted to secure funding for a rebuilding programme which failed. In 2017, part of the pier collapsed onto the beach below, dangerous sections of the pier were dismantled and a new plan to create a shortened pier were agreed upon by the council and a charitable trust representing the community interest. 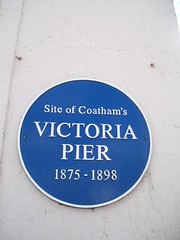