The Prisoner is a 1967 British avant-garde social science fiction television series about an unnamed British intelligence agent who is abducted and imprisoned in a mysterious coastal village, where his captors try to find out why he abruptly resigned from his job. It was created by Patrick McGoohan and George Markstein, with McGoohan playing the lead role of Number Six. Episode plots have elements of science fiction, allegory, and psychological drama, as well as spy fiction. It was produced by Everyman Films for distribution by Lew Grade's ITC Entertainment.A single season of 17 episodes was filmed between September 1966 and January 1968, with exterior location filming in Portmeirion, Wales. Interior scenes were filmed at MGM-British Studios in Borehamwood. The series was first broadcast in Canada beginning on 6 September 1967, in the UK on 29 September 1967, and in the US on 1 June 1968. Although the show was sold as a thriller in the mold of the previous series starring McGoohan, Danger Man (retitled as Secret Agent in the US), its combination of 1960s countercultural themes and surrealistic setting had a far-reaching influence on science fiction and fantasy TV programming, and on narrative popular culture in general. Since its initial screening, the series has developed a cult following.A six-part TV miniseries remake aired on the US cable channel AMC in November 2009. In 2016, Big Finish Productions reinterpreted the series as an audio drama. 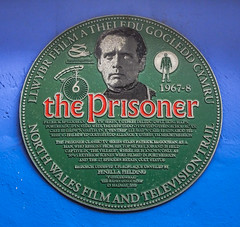 Flat 5, The Mews, Portmeirion, United Kingdom where it was filmed