William Shankly OBE (2 September 1913 – 29 September 1981) was a Scottish football player and manager, who is best known for his time as manager of Liverpool. Shankly brought success to Liverpool, gaining promotion to the First Division and winning three League Championships and the UEFA Cup. He laid foundations on which his successors Bob Paisley and Joe Fagan were able to build by winning seven league titles and four European Cups in the ten seasons after Shankly retired in 1974. A charismatic, iconic figure at the club, his oratory stirred the emotions of the fanbase. In 2019, 60 years after Shankly arrived at Liverpool, Tony Evans of The Independent wrote, “Shankly created the idea of Liverpool, transforming the football club by emphasising the importance of the Kop and making supporters feel like participants.” Shankly came from a small Scottish mining community and was one of five brothers who played football professionally. He played as a ball-winning right-half and was capped twelve times for Scotland, including seven wartime internationals. He spent one season at Carlisle United before spending the rest of his career at Preston North End, with whom he won the FA Cup in 1938. His playing career was interrupted by his service in the Royal Air Force during the Second World War. He became a manager after he retired from playing in 1949, returning to Carlisle United. He later managed Grimsby Town, Workington and Huddersfield Town before moving to become Liverpool manager in December 1959. Shankly took charge of Liverpool when they were in the Second Division and rebuilt the team into a major force in English and European football. He led Liverpool to the Second Division Championship to gain promotion to the top-flight First Division in 1962, before going on to win three First Division Championships, two FA Cups, four Charity Shields and one UEFA Cup. It was during Shankly’s reign the club changed to an all-red home strip, and "You'll Never Walk Alone" became the club’s anthem. Shankly announced his surprise retirement from football a few weeks after Liverpool had won the 1974 FA Cup Final, having managed the club for 15 years, and was succeeded by his long-time assistant Bob Paisley. He led the Liverpool team out for the last time at Wembley for the 1974 FA Charity Shield. He died seven years later, aged 68. Considered one of the greatest managers in the sport, Shankly was among the inaugural inductees into the English Football Hall of Fame in 2002, and the Scottish Football Hall of Fame in 2004. 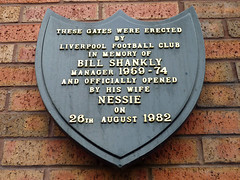