William Howard Taft (September 15, 1857 – March 8, 1930) was the 27th president of the United States (1909–1913) and the tenth chief justice of the United States (1921–1930), the only person to have held both offices. Taft was elected president in 1908, the chosen successor of Theodore Roosevelt, but was defeated for reelection in 1912 by Woodrow Wilson after Roosevelt split the Republican vote by running as a third-party candidate. In 1921, President Warren G. Harding appointed Taft to be chief justice, a position he held until a month before his death. Taft was born in Cincinnati, Ohio, in 1857. His father, Alphonso Taft, was a U.S. attorney general and secretary of war. Taft attended Yale and joined the Skull and Bones, of which his father was a founding member. After becoming a lawyer, Taft was appointed a judge while still in his twenties. He continued a rapid rise, being named solicitor general and a judge of the Sixth Circuit Court of Appeals. In 1901, President William McKinley appointed Taft civilian governor of the Philippines. In 1904, Roosevelt made him Secretary of War, and he became Roosevelt's hand-picked successor. Despite his personal ambition to become chief justice, Taft declined repeated offers of appointment to the Supreme Court of the United States, believing his political work to be more important. With Roosevelt's help, Taft had little opposition for the Republican nomination for president in 1908 and easily defeated William Jennings Bryan for the presidency in that November's election. In the White House, he focused on East Asia more than European affairs and repeatedly intervened to prop up or remove Latin American governments. Taft sought reductions to trade tariffs, then a major source of governmental income, but the resulting bill was heavily influenced by special interests. His administration was filled with conflict between the Republican Party's conservative wing, with which Taft often sympathized, and its progressive wing, toward which Roosevelt moved more and more. Controversies over conservation and antitrust cases filed by the Taft administration served to further separate the two men. Roosevelt challenged Taft for renomination in 1912. Taft used his control of the party machinery to gain a bare majority of delegates and Roosevelt bolted the party. The split left Taft with little chance of reelection, and he took only Utah and Vermont in Wilson's victory. After leaving office, Taft returned to Yale as a professor, continuing his political activity and working against war through the League to Enforce Peace. In 1921, Harding appointed Taft chief justice, an office he had long sought. Chief Justice Taft was a conservative on business issues, and under him there were advances in individual rights. In poor health, he resigned in February 1930, and died the following month. He was buried at Arlington National Cemetery, the first president and first Supreme Court justice to be interred there. Taft is generally listed near the middle in historians' rankings of U.S. presidents. 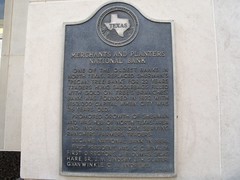 Pioneer Plaza. Pioneer Plaza was the center of public activity in early El Paso. A United States military guard was posted here in the late 1870s to defend citizens from Apache Indian attacks, and military bands performed in the plaza. An irrigation ditch flowed along the south boundary of the plaza and nourished a line of trees which shaded the area. Among the trees was an ash known as the "Newspaper Tree" on which public notices were posted. Major roads and trails passed through the plaza. El Paso Street led southward to El Paso Del Norte, Mexico, and San Francisco Street led westward from the plaza to connect with trails to California. The Butterfield overland stage route crossed the southwest corner of the plaza. Pioneer Plaza was the site of many parades and public events. United States President William H. Taft and Mexican President Porfirio Diaz each passed through the plaza with their entourages while en route to the Chamber of Commerce building for their historic meeting on October 16, 1909. Due to its small size, Pioneer Plaza was replaced by San Jacinto Plaza as the center of activity. (1988) #4031

?, El Paso, TX, United States where they passed through

Rincon Ranch. Youngs Coleman and his son, Thomas, established a south Texas ranching empire in the 1850's. The headquarters of their operation was here at Rincon where there was a fresh water depression. In 1871 the Colemans joined with George W. Fulton and T.H. and J.M. Mathis to form what became the Coleman-Fulton pasture company. The headquarters remained at Rincon and the ranch included a main house, worker housing, a school, commissary, and numerous other outbuildings. President William Howard Taft visited Rincon in 1909. The company was dissolved in the 1920's. #4268

FM 136, about 9 mi. N of Gregory, Gregory, TX, United States where they visited

Town of Pettus. Oil capital of Bee County, Pettus was settled in the 1850's when John Freeman Pettus set up his sprawling ranch about 4 miles south of here. The son of one of Stephen F. Austin's first 300 colonists, Pettus was an extensive cattle and horse breeder. The town, previously called "Dry Medio" for a nearby creek, was named for him during the Civil War. The community was in the vicinity of two important Indian skirmishes in Bee County in 1859 and the 1870's; but the town slept until 1886, when the tracks of the San Antionio & Aransas Pass railroad reached this site. It then awoke to become the cattle shipping center for the area. In the same year, John S. Hodges, a pioneer citizen, laid out the townsite and donated land to be used for streets and S.A. & A.P. right-of-way. For years the railroad stockyards and depot were places of bustling activity as freight trains came for loading and wood-burning steam engines took on water. In 1909 the presidential train of Wm. H. Taft stopped at the Pettus water tank. The tank--a final monument to steam railroading here--was razed, 1965. In 1929 the Houston Oil Co. brought in its well "No. 1-Maggie Ray McKinney" and from that time Pettus has played a continuing useful role in Texas economy. (1968) #5536

President William Howard Taft Visits Taft. In 1908, Charles P. Taft, director of the Coleman-Fulton Pasture Company (also known as Taft Ranch) extended an invitation to his half-brother, newly-elected President William Howard Taft, to visit the 165,000-acre Taft Ranch and the Taft community. The President agreed to come in October 1909. Charles Taft and ranch manager Joseph F. Green immediately began preparations for the event. Green had a nine-hole golf course built at La Quinta, his estate near Gregory where the President would stay during his visit. He also built the 22-room Green Hotel in Gregory to house the press corps and additional visitors. President Taft's special railroad car arrived in Gregory on October 20, 1909. An automobile procession took the presidential party to La Quinta, where they were greeted by Texas Governor Thomas M. Campbell. The following day the President visited Taft, where he spoke to citizens assembled at the local school and enjoyed ice cream at the company creamery. A barbeque and rodeo were held at the Rincon Ranch in the President's honor, and he later visited Corpus Christi, where he spoke to a crowd of 15,000 people. (1991) #6343

Site of Binkley Hotel. Site of Binkley Hotel In the 1870s, a joint stock company was organized to construct a hotel in Sherman. One of the largest stockholders was Judge C.C. Binkley, a community leader for whom the hotel would be named. Binkley was also president of the Merchants and Planters (M & P) Bank, established in Sherman in 1872. The first two hotels at this site burned, and the second fire was reportedly set to cover an attempted robbery. The next hotel was built by the Sherman Hotel Company and operated by bank president C.B. Dorchester. The bank, then the Merchants and Planters National Bank, served farmers, ranchers, counties, and Indian tribes, becoming a financial hub for Texas and Oklahoma, and the close ties between bank and hotel attracted and accommodated business in the growing community. The Sherman Opera House, which brought in touring dramatic companies, added to the list of popular and prominent men and women who visited the hotel. Ladies would enter on the north, at the carriage entrance, and avoid passing the bar on their way to receptions in the dining room of the three-story hotel. Former president William Howard Taft visited Sherman in 1919 and spoke briefly from a wrought-iron balcony on the hotel's north side. The hotel's name changed to Texas Hotel in 1947. The third and final Binkley Hotel building burned in 1967. During its many decades of operation, the business contributed to Sherman's development. The hotel, bank and opera house together formed a unique, functionally integrated business, civic and cultural complex. The hotel served the many guests of the bank and opera house and was a popular spot for travelers as well as local residents. (2002) #12871