John Tyler (March 29, 1790 – January 18, 1862) was the 10th president of the United States, serving from 1841 to 1845, after briefly holding office as the 10th vice president in 1841. He was elected vice president on the 1840 Whig ticket with President William Henry Harrison, succeeding to the presidency after Harrison's death 31 days after assuming office. Tyler was a stalwart supporter and advocate of states' rights, including regarding slavery, and he adopted nationalistic policies as president only when they did not infringe on the powers of the states. His unexpected rise to the presidency posed a threat to the presidential ambitions of Henry Clay and other Whig politicians, and left Tyler estranged from both of the nation's major political parties at the time. Tyler was born into a prominent slaveholding Virginia family. He became a national figure at a time of political upheaval. In the 1820s, the nation's only political party was the Democratic-Republican Party, and it split into factions. Tyler was initially a Democrat, but he opposed President Andrew Jackson during the Nullification Crisis as he saw Jackson's actions as infringing on states' rights and criticized Jackson's expansion of executive power during the Bank War. This led Tyler to ally with the Whig Party. He served as a Virginia state legislator and governor, U.S. representative, and U.S. senator. He was one of two regional Whig vice-presidential nominees in the 1836 presidential election and the sole nominee on 1840 Whig presidential ticket as William Henry Harrison's running mate. Under the campaign slogan "Tippecanoe and Tyler Too", the Harrison-Tyler ticket defeated incumbent president Martin Van Buren. President Harrison died just one month after taking office, and Tyler became the first vice president to succeed to the presidency without being elected. Amid uncertainty as to whether a vice president succeeded a deceased president, or merely took on his duties, Tyler immediately took the presidential oath of office, setting a lasting precedent, though some denied he was fully president. Tyler signed into law some of the Whig-controlled Congress's bills, but he was a strict constructionist and vetoed the party's bills to create a national bank and raise tariff rates. He believed that the president, rather than Congress, should set policy, and he sought to bypass the Whig establishment led by Senator Henry Clay. Most of Tyler's Cabinet resigned shortly into his term and the Whigs expelled him from the party, dubbing him "His Accidency". Tyler was the first president to have his veto of legislation overridden by Congress. He faced a stalemate on domestic policy, although he had several foreign-policy achievements, including the Webster–Ashburton Treaty with Britain and the Treaty of Wanghia with Qing China. Tyler was a firm believer in manifest destiny and saw the annexation of Texas as economically advantageous to the United States, signing a bill to offer statehood to Texas just before leaving office and returning to his plantation. When the American Civil War began in 1861, Tyler sided with the Confederacy despite his initial support of the Peace Conference. He presided over the opening of the Virginia Secession Convention and won election to the Confederate House of Representatives shortly before his death. Some scholars have praised Tyler's political resolve, but historians have generally given his presidency a low ranking. Today, he is seldom remembered in comparison to other presidents and maintains only a limited presence in American cultural memory. 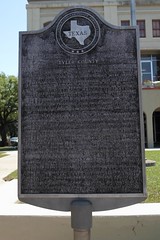 City of Tyler. In area opened 1839 to white settlers by Republic of Texas victories over Cherokee Indians whose trails led the way to good springs, fine farmlands, useful salines. The first Legislature of the state of Texas named the town (founded 1846) for President John Tyler, who signed the resolution annexing Texas to the United States. Originally a farm market, Tyler in early years had few men of wealth, but by 1860 was known for good schools, churches and cultured citizens. Several men here raised and commanded troops in Civil War. After mid-1863 this was transportation headquarters for Trans-Mississippi Department of the Confederacy. It had an ordnance factory and was site of Camp Ford -- the largest P.O.W. post west of the Mississippi. In 1870s important as site of railroad shops and roundhouse. Developed industries, manufacturing, fruit and vegetable packing, shipping, expanding economy. Furnished Texas with statesmen, including Governors Richard B. Hubbard (in office 1876-1879), O. M. Roberts (1879-1883) and James Stephen Hogg (1891-1895). Upon discovery of nearby East Texas oil field in 1931, became investment, banking, servicing center. Home of Tyler Junior College; Annual Rose Festival. #7762

?, Woodville, TX, United States where they is commemorated

Presidential Convention. The Whig Convention of Dec. 1839 met in this church and nominated Wm. Henry Harrison for president, John Tyler for vice-president. Popularized as "Tippecanoe and Tyler Too," they were elected, 1840.