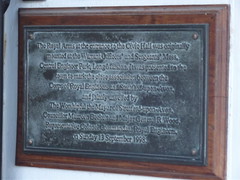 The Royal Arms at the entrance to the Civic Hall was originally mounted at the Warrant Officer's and Sergeants' Mess, Central Engineer Park, Long Marston. It was presented to the town to mark the close association between the Corps of Royal Engineers and Stratford-upon-Avon, and jointly unveiled by The Worshipful the Mayor of Stratford-upon-Avon, Councillor Maureen Beckett and Major General R Wood, Representative Colonel Commandant Royal Engineers, on Sunday 13 September 1998.