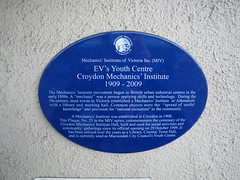 EV’s Youth Centre. Croydon Mechanics' Institute. 1909-2009. The Mechanics' Institute movement began in British urban industrial centres in the early 1800s. A "mechanic" was a person applying skills and technology. During the 19th century, most towns in Victoria established a Mechanics' Institute or Athenaeum with a library and meeting hall. Common objects were the "spread of useful knowledge" and provision for "rational recreation" in the community. A Mechanics’ Institute was established in Croydon in 1908. This Plaque, No. 25 in the MIV series, commemorates the centenary of the Croydon Mechanics’ Institute Hall, built and used for social activities and has been utilised over the years as a Library, Cinema, Town Hall, and is currently used as Maroondah City Council’s Youth Centre.