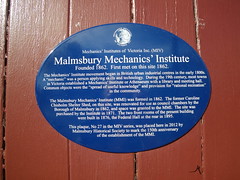 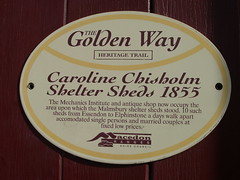 Malmsbury Mechanics' Institute. Founded 1862. First met on this site 1862. The Mechanics' Institute movement began in British urban industrial centres in the early 1800s. A "mechanic" was a person applying skills and technology. During the 19th century, most towns in Victoria established a Mechanics' Institute or Athenaeum with a library and meeting hall. Common objects were the "spread of useful knowledge" and provision for "rational recreation" in the community.The Malmsbury Mechanics’ Institute (MMI) was formed in 1862. The former Caroline Chisholm Shelter Shed, on this site, was renovated for use as council chambers by the Borough of Malmsbury in 1862, and space was granted to the MMI. The site was purchased by the Institute in 1871. The two front rooms of the present building were built in 1876, the Fedral Hall at the rear in 1895. This plaque, No. 27 in the MIV series, was placed here in 2012 by Malmsbury Historical Society to mark the 150th anniversary of the establishment of MMI.