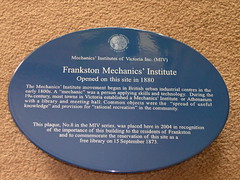 Frankston Mechanics' Institute. Opened on this site 1880. The Mechanics' Institute movement began in British urban industrial centres in the early 1800s. A "mechanic" was a person applying skills and technology. During the 19th century, most towns in Victoria established a Mechanics' Institute or Athenaeum with a library and meeting hall. Common objects were the "spread of useful knowledge" and provision for "rational recreation" in the community. This plaque, No. 8 in the MIV series, was placed here in 2004 in recognition of the importance of this building to the residents of Frankston and to commemorate the reservation of this site as a free library on 15 September 1873.